You have Successfully Subscribed!

The new smart irrigation system of parks and gardens has been introduced today in Barcelona, one of the leading Smart Cities in the world. We are pleased because we have implemented this new system in collaboration with the Barcelona City Council!

We shared the presentation with Cristina Vila, General Manager of Water Cycle in Barcelona and Antoni Vives, Deputy Major of Urban Living. Cristina has stated:

“…the system will optimize water consumption because it will irrigate with the proper amount according to weather conditions and the plants’ needs.”

Sensors gather information about humidity, salinity, temperature, wind and several other factors that automatically regulate the amount of water by means of a program that can be managed with computers, smartphones and tablets. The graphical user interface is really friendly, as you can see on this screenshot: 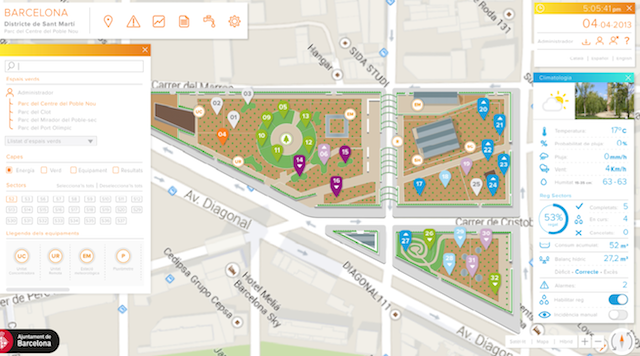 Antoni Vives stated that this new Smart irrigation system will enable up to a 25% saving of water:

“A system that many cities in the world arguably will implement.”

It is operating already at the Centre de Poblenou Park, and next month will be operating also in Ciutadella and Nous Barris Parks. After that it will be implemented in the remaining Barcelona parks and gardens.

This is the video of the presentation:

Joan Puigdollers, Town Councillor of the Environment, stated that projects like this provide visibility to the Smart City concept. For this project to be a reality, we have carried out a first stage of assessment that enabled us to define its functional part, architecture and ‘look & feel’. This assessment allowed us to get a precise and solid management of the Project that secured the successful hardware and software implementation stages.

Certainly, we have used the Wonderware open platform, as well as standard communication equipment and protocols, with the purpose of securing a seamless connectivity between all existing and future systems with a scalability adapted to the needs of the city. In fact, all escalator and lift systems are going to be added to this platform soon.

In Creating Smart Cities by Logitek | Wonderware Spain we are very happy for contributing to the development of Barcelona as a Smart City. These are some samples of the Barcelona Parks and Gardens irrigation smart irrigation system control panel:

Sorry, the comment form is closed at this time.